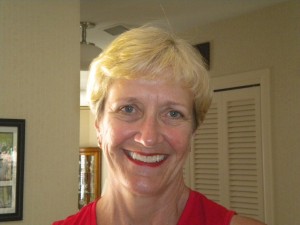 Barbara Phipps remembers the time she spent with friends when she first arrived at Guantánamo with her family after her father was assigned to the Cuban outpost.

My first arrival to Gitmo was really hilarious. I arrived two weeks earlier than what I was supposed to so no one at the dental clinic was expecting me. And I am a young single wave then and it was April 1. I did not know what I was getting into and so when the flight got there, I just took my time getting off the plane because I figured well nobody even knows I am coming, I do not know where I am going and so when I get off the plane I am the last person to get off the plane and I come off and walk down the steps and there is a fence line for the airport and there is probably 25 or 30 guys standing there hooting and hollering, “Hey! welcome to Gitmo!” and I am thinking, “oh my god this has got to be a joke.” So as soon as I got my bags and they come. If I remember there was like three or four of them that come out “oh, let us help you. Let us help you with your bags. Where you going? Where are you going to be? Who are you assigned to?” I said the dental clinic. And well, “Who’s here to meet you?” and I said, “well, nobody is here to meet me because they do not know I am coming.” And of course this was in April and I had my dress blues on which were wool. It is hot. Hot hot hot. So anyway these guys help me get my luggage and put me on this jeep and take me to the ferry landing. Well I did not know I would be riding a ferry. It was comical but at the time it was very unnerving because I was like, “oh my gosh, what have I gotten myself into?” When I think about it now, it was hilarious.

My roommate and i pooled our money together and we bought a Gitmo car. A Volkswagen and I do not remember. It was a older Volkswagen and it was this god awful green and we called it little puke because it was like a pukey green and so after we bought little puke that was our means of transportation. I did not leave too many stones unturned. I learned how to square dance when I was down there, I learned how to sail. We used to go bowling. There was a bowling alley.  We used to do a lot of bowling. We used to go dancing at the clubs. I played tennis. I learned how to golf and then with my girl friend I volunteered to be girl scout leaders so we had a girl scout troupe while we were there. We took them camping and we got caught in a horrible rainstorm down in this beach. I cannot remember the name of this beach but anyway it was down like in this valley and this rainstorm came up one night and everything started I mean flooding and they had to come down and basically rescue us. All these girls. Everything was soaked. It was a mess

I never really “dated” anybody but I always had a date to either we would go to the clubs for. I never bought a drink or bought my dinner when we went out.

I guess one of the fondest memories I would have to say was the going away party that all of my friends – dependent friends more than the single military people but they had this huge going away party for me when I left and it was so much fun and I think that is probably cause I realized what great friends I made down there.Barbara Phipps